Posted on August 03, 2016 by Jennifer Morilla & filed under Travel
Thinking of traveling to India? Or maybe you’re already planning an escape? If so, whatever the case is, you’ll need to know a few ‘do not dos’ during your travel adventure. India is filled with culture, history, amazing food, and let’s not forget beauty. It’s also known as a third world country and it isn’t exactly the cleanest or the safest.

The most important travel tip to follow, no matter where you are, whether you’re male or female, is to always be aware of your surroundings. Another one of my top tips (this one is a little less straight forward) is – don’t forget to carry hand sanitizer or wipes at ALL TIMES!

But let’s get into the more official rules to follow for a successful and safe India trip.

Rule One: Do NOT drink the water.

The tap water in India isn’t 100% sanitary. You should never drink water from the tap in any country, but especially India. Even when you’re brushing your teeth, use bottled water to rinse. Usually hotels have bottle water to drink and use for free. Use that for drinking and brushing your teeth. The reason this is so important is because our bodies aren’t used to the water in India and it might not be as ‘drinkable’ which causes a greater chance of getting sick. Getting sick from contaminated water isn’t fun. Water runs through our entire body. Which means that detoxing our bodies of any contamination could be very dangerous, painful, and could take days.

Rule Two: Do NOT wear short sleeve shirts or shorts.

This is purely out of respect. It’s part of Indian culture for both men and women (women more than men) to be ‘covered’ up. Regardless of how hot the weather is. It gets really hot in India! A woman must wear something covering her shoulders and legs. Men can wear shorts, but no shorter than below the kneecap. This rule is also important to follow because when going into temples, out of respect, everyone needs to be covered. It’s very rare they let you into the temple if you aren’t properly dressed. 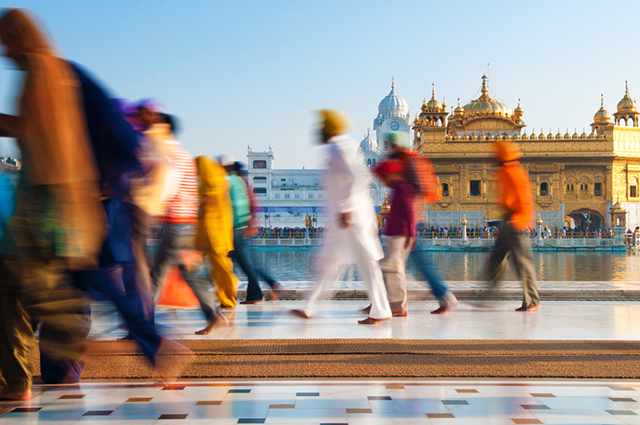 Rule Three: Do NOT eat the street food.

Unless you’re coming from a 3rd world country and you’re always eating your country’s street food, eating the street food in India might not be the smartest thing to do. Indian food, in general, is extremely spicy and although that doesn’t have much to do with why you shouldn’t eat street food, you should be aware of that first. Your stomach probably won’t be used to it. Secondly, the people selling food on the streets spend all day and night standing on the same corner selling food. If they have to use the restroom it might be rare that they leave and go elsewhere. What might happen is, they step around the corner, quickly, and return, possibly without the chance to wash their hands. Which means that catching a virus, or worse, a worm is more common. But don’t let the whole ‘don’t eat street food’ stop you from trying India food. Indian food is absolutely delicious if you’re open to trying it. If you don’t like spices, and you don’t like trying different foods, then it might not be for you.

Rule Four: Do NOT give money to begging children.

This makes me sound like a horrible human, but on the contrary. The problem is that most of the children aren’t begging for themselves but are working for someone else. So chances are they don’t ever see the money you give them because it goes to someone else. I would give them food instead. There were tons of times I went to eat at a restaurant and didn’t finish my food. I took leftovers to the children or families on the streets outside. Also, if and when you give money to these children, most of the time they are watching where you are pulling your money from. Which could potentially lead to you getting robbed.

While there are plenty of things to look out for when traveling throughout India, don’t let that stop you from actually going. I could also share the same rules for most of the countries elsewhere I’ve travel to. The only difference is that some countries are more ‘tourist friendly,’ where others, like India, aren’t as much. That doesn’t mean you shouldn’t travel and explore. It truly is an absolutely amazing country with so much culture, beauty, and history!

About the Author: Jen Morilla AKA The Social Girl Traveler is a 26-year-old Jersey girl. She is a travel junkie, pizza loving, and whiskey drinker, adventure freak! Jen quit her New York City corporate life and salary for a budget and a backpack in February of 2015. She believes in traveling with a purpose. Jen is fluent in 3 languages and has lived/studied/worked in 3 countries, traveled to 29 countries throughout 6 continents! Join her as she continues to travel the world and share her beautiful struggle, she calls: her life!

How to Keep Your Stuff Safe When You Travel